Home What Is Jivamukti Yoga? |

What Is Jivamukti Yoga? |

Jivamukti Yoga is the practice of yoga used as a means to transform society. Jivamukti Yoga is a reform of the yoga tradition initiated by Swami Vivekananda to uplift humanity. It takes the name of the school and not of any individual teacher or founder. The teachings, practices and philosophy of Jivamukti Yoga are based on the Vedic tradition.

Jivamukti Yoga helps people to understand the truth of life, free from the constraints and perceptions that bind them in ordinary consciousness. A simple and joyful approach to yoga, the methods taught by Jivamukti Yoga are based on the belief that yoga is not just about physical exercises, but an integral part of our lives.

If you have any, you should check them at the door. Allow the energy to lead the way… Roll out your mat. What follows cannot be taught; the only way to learn is via experience.

“Lokah Samastah Sukhino Bhavantu” Is a Jivamukti Yoga chant that means “May all creatures everywhere be happy and free, and may my own thoughts, words, and deeds contribute in some way to their happiness and freedom.”

The goal of Jivamukti yoga is to remind Western Civilization of yoga’s original intent: to provide a practitioner with a path to enlightenment; to weave a holistic approach to living into every class, and to allow that approach to flow with grace into every moment through compassion for all living beings.

The physical advantages of Jivamukti yoga practice are comparable to those of a rigorous yoga practice, and include increased strength, balance, and flexibility, as well as detoxification and improved circulation, as well as a reduction in stress and pollutants. There are too many good physical advantages to mention, according to David and Sharon, but the important thing is that “you build up a body of light” and feel more comfortable with who you are.

Dissolving separateness, realizing oneness, and discovering permanent pleasure are among spiritual advantages of Jivamukti yoga. Yoga practice feeds The Self by creating a direct pranic connection with The Divine, the source of endless pleasure.

Is Jivamukti Yoga a Good Fit for Me?

Jivamukti Yoga is a kind of yoga that includes both physical and spiritual aspects in every session. It’s a rigorous kind of yoga that anybody can practice if they’re ready to listen to their bodies and adjust postures as necessary. Jivamukti Yoga, according to David Life, is for students who have “imagination, a spirit of adventure, and the bravery to change.” Sharon goes on to say that the ideal applicant is someone who “wants to be completely free… to live their life in meaningful ways.”

On this journey we call life, we all have to start somewhere, so I urge you to take a Jivamukti Yoga class, wherever you are on your map; to enter with an open heart and an open mind, and allow the vibration of music and strong asana practice guide you down an unfathomable road.

Julie Keel, RYT E-200, Founder of River’s Edge Yoga in Louisville, KY, is our guest writer for this Yoga 101.

Jivamukti Yoga is a yoga practice dedicated to the practice of living a healthy and fully engaged life in the face of the ever-changing human condition, and it’s about finding a way to be fully present for yourself and others. It’s a path to self-realization and a way of life, not a one-size-fits-all solution.. Read more about jivamukti yoga sequence and let us know what you think.

Jivamukti Yoga is no longer in business.

How is Jivamukti Yoga different?

Jivamukti Yoga is a style of yoga that was developed by Sharon Gannon, who studied with B.K.S Iyengar and has been teaching since the 1970s. The style of yoga focuses on breath work, meditation, and poses that are designed to help you connect with your body and mind.

What is the most popular yoga?

The most popular yoga is Bikram Yoga.

The way a person feels about their body is a huge factor…
To put it simply, I’ve had epilepsy for a long time. Countless… 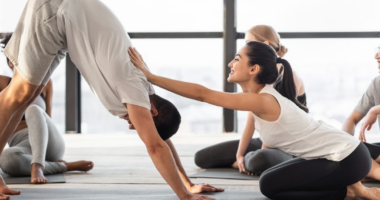 You know the funny thing about yoga? It’s actually great for guys!…